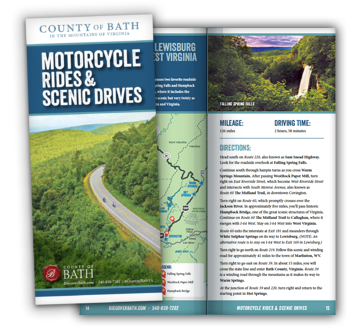 A favorite photo spot for visitors to Bath County is located just across the line in neighboring Alleghany County. It’s not every day that you can see a beautiful 80-foot waterfall from a roadside overlook. It’s so popular that we included it on two of the routes featured in Bath County’s Motorcycle Rides & Scenic Drives brochure.

The falls was part of a land grant from England’s King George III. Thomas Jefferson, who was then Governor of Virginia, described Falling Spring Falls as “a remarkable cascade… falling over a rock about 200 feet to the valley below.” We’re certainly not going to argue with the former governor and third president about the magnificence of the falls, but why the discrepancy in height between Jefferson’s comment and every modern brochure? 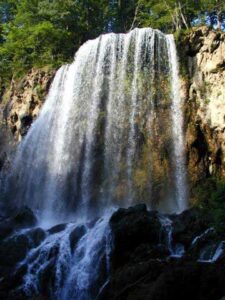 A little known fact about Falling Spring Falls is that it’s not exactly the same one that Jefferson saw. Mining operations in the area between 1927 and 1941 necessitated re-routing the stream and the relocation of the falls to its current 80-foot drop. In 2004, Mead Westvaco donated the falls and surrounding 19 acres to the Virginia Departments of Conservation and Recreation. It is now maintained by Douthat State Park. There is an easily accessible viewing area that offers a great photo opportunity of the falls and the majestic mountains in the distance.

It’s worth the journey to see and photograph this natural treasure in any season. We think Jefferson would be equally as pleased with the modern Falling Spring Falls.